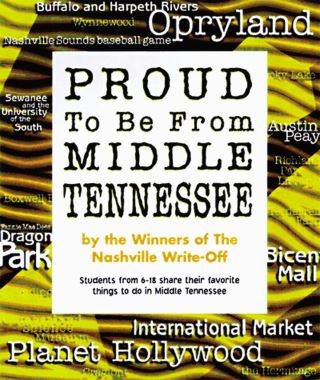 Proud to Be from Middle Tennessee

The Nashville Scene created “Calling All Kids . . . The Nashville Write-Off” in 1996 as a way to inspire young writers. This year, the weekly paper asked its budding authors to address the following topic: “My Favorite Things to Do in Middle Tennessee.”

Entry forms were run in the Scene over several weeks, and were also distributed at various malls, pizza joints, and at least one optometrist’s office. Soon, essays were flooding our offices. After a panel of judges was convened to review the works, one grand prize winner was selected from each age category (ages 6–12, and 13–18), and a number of honorable mentions were selected as well.

The winners were announced at the Southern Festival of Books, and they were awarded cash prizes. The winners were also assured of having their work published. This book, in fact, is a compilation of the winning works.