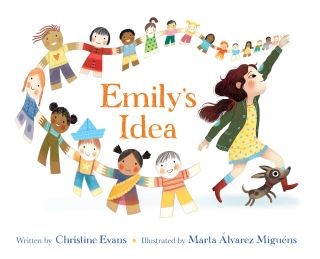 Emily’s idea started small. Many beautiful ideas do.
She folded, doodled, and snipped.
But also, like many ideas, Emily’s small idea grew.

When a little girl decides to create a paper chain of dolls, her idea catches on. Then it spreads far and wide as children around the world begin to create and share their own. This is the story of how that girl's simple creative act spreads the message of love and acceptance around the world.

For readers ages 4–8.
Includes a make-your-own page to help you get started on your own paper doll chains.

Christine Evans:
Christine Evans is a British expat who lives in Northern California with her husband and two young daughters. Her work has appeared in Highlights, High Five, and Hello magazines. She is also the author of Evelyn the Adventurous Entomologist: The True Story of a World-Traveling Bug Hunter (Innovation Press, September, 2019). For more, visit pinwheelsandstories.com.
Marta Álvarez Miguéns has been illustrating children's picture books since 2002. Her book Shark Lady was named a Parents magazine Best Children's Book of 2017 and won the Blue Spruce Award in 2018. She lives in A Coruña, Spain. Learn more about her at martalvarez.com.