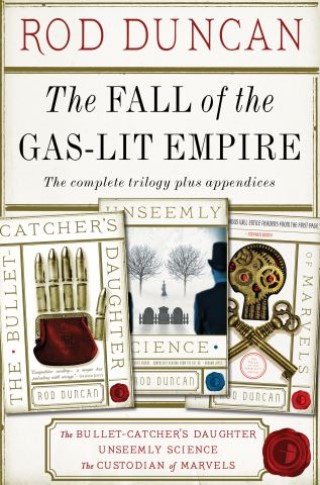 The Fall of the Gas-Lit Empire Boxed Set

The ingenious alternate history of The Fall of the Gas-Lit Empire trilogy presented in a single volume, to delight the mind and the heart. Containing The Bullet-Catcher’s Daughter, Unseemly Science and The Custodian of Marvels, complete with appendices.

Elizabeth Barnabus lives a double life – as herself and as her brother, the private detective. She is trying to solve the mystery of a disappearing aristocrat and a hoard of arcane machines. In her way stand the rogues, freaks and self-proclaimed alchemists of a travelling circus. But when she comes up against an agent of the all-powerful Patent Office, her life and the course of history will begin to change. And not necessarily for the better…

Witnessing the brutal hanging of someone very close to her, Elizabeth resolves to throw the Bullet Catcher’s Handbook into the fire, and forget her past. If only it were that easy! There is a new charitable organisation in town, run by some highly respectable women. But something doesn’t feel right to Elizabeth. Perhaps it is time for her fictional brother to come out of retirement for one last case? Her unstoppable curiosity leads her to a dark world of body-snatching, unseemly experimentation, politics and scandal. Never was it harder for a woman in a man’s world…

You’d have to be mad to steal from the feared International Patent Office. But that’s what Elizabeth Barnabus is about to try. A one-time enemy from the circus has persuaded her to attempt a heist that will be the ultimate conjuring trick. Hidden in the vaults of the Patent Court in London lie secrets that could shake the very pillars of the Gas-Lit Empire. All that stands in Elizabeth’s way are the agents of the Patent Office, a Duke’s private army and the mysterious Custodian of Marvels.

Collects The Bullet-Catcher’s Daughter, Unseemly Science and The Custodian of Marvels, complete with appendices.

Rod Duncan: Rod Duncan writes alternate history, fantasy and contemporary crime. His novels have been shortlisted for the Philip K. Dick Award, the East Midlands Book Award and the John Creasey Dagger of the Crime Writers’ Association. A dyslexic with a background in scientific research, he now lectures in creative writing at DeMontfort University.

Some might say that he is obsessed with boundary markers, naive 18th Century gravestones and forming friendships with crows. But he says he is interested in the way things change.