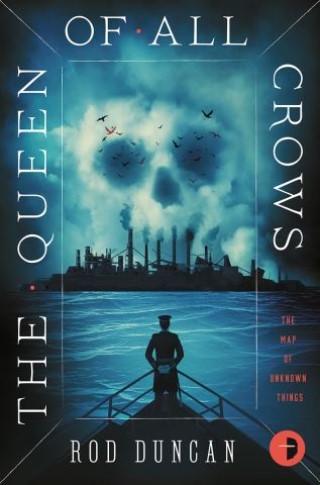 The Queen of All Crows

The First Book in The Map of Unknown Things

Only one woman can stop the world from descending into endless war, in the thrilling new series in the world of the Gas-Lit Empire

The year is 2012. The nations of the world are bound together in an alliance of collective security, overseen by the International Patent Office, and its ruthless stranglehold on technology.

When airships start disappearing in the middle of the Atlantic, the Patent Office is desperate to discover what has happened. Forbidden to operate beyond the territorial waters of member nations, they send spies to investigate in secret.

One of those spies is Elizabeth Barnabus. She must overcome her dislike of the controlling Patent Office, disguise herself as a man, and take to the sea in search of the floating nation of pirates who threaten the world order.

File Under: Fantasy [ A Lost Airship | On the Sargasso| Stowaway Bay | The Crow Queen ]

Rod Duncan: Rod Duncan writes alternate history, fantasy and contemporary crime. His novels have been shortlisted for the Philip K. Dick Award, the East Midlands Book Award and the John Creasey Dagger of the Crime Writers’ Association. A dyslexic with a background in scientific research, he now lectures in creative writing at DeMontfort University.

Some might say that he is obsessed with boundary markers, naive 18th Century gravestones and forming friendships with crows. But he says he is interested in the way things change.