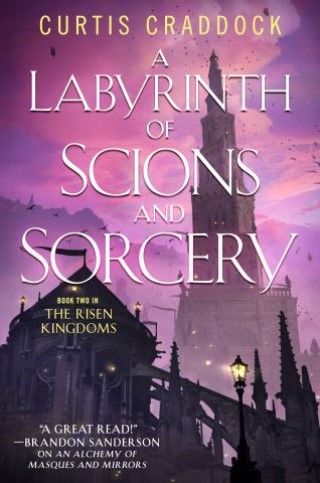 A Labyrinth of Scions and Sorcery

Book Two in the Risen Kingdoms

Isabelle des Zephyrs has always been underestimated throughout her life, but after discovering the well of hidden magic within her, unveiling a centuries-long conspiracy, and stopping a war between rival nations, she has gained a newfound respect amongst the cutthroat court.

All that is quickly taken away when Isabelle is unfairly convicted of breaking the treaty she helped write and has her political rank and status taken away. Now bereft, she nevertheless finds herself drawn into mystery when her faithful musketeer Jean-Claude uncovers a series of gruesome murders by someone calling themselves the Harvest King.

As panic swells, the capital descends into chaos, when the emperor is usurped from the throne by a rival noble. Betrayed by their allies and hunted by assassins, Isabelle and Jean-Claude alone must thwart the coup, but not before it changes l’Empire forever.

“A gripping tale of a woman who refuses to be defined by her physical and magical limitations, thwarting both assassins and all who see her as a pawn. A great read!”—#1 New York Times bestselling author Brandon Sanderson, on An Alchemy of Masques and Mirrors

Curtis Craddock: CURTIS CRADDOCK lives in Sterling, CO, where he teaches English to inmates in a state penitentiary. A Labyrinth of Scions and Sorcery is the second in The Risen Kingdoms trilogy, following his acclaimed debut An Alchemy of Masques and Mirrors.