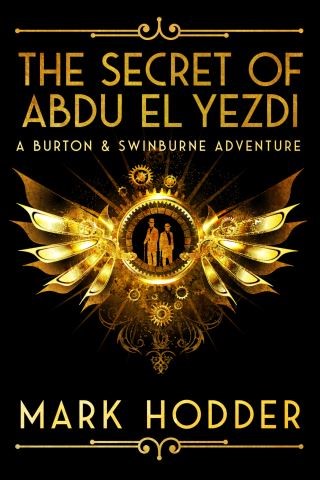 The Secret of Abdu El Yezdi

After barely surviving his discovery of the source of the Nile, explorer Sir Richard Burton returns home to fame, glory, and a knighthood from his highness King George V. But he also receives another title―King’s Agent…for Burton may be the only man who can save England from doom.

Once he is brought into the king’s service, Sir Richard is trusted with a shocking truth: ever since the assassination of Queen Victoria, those in power have been guided and advised by a spirit―Abdu El Yezdi―whose wisdom has brought about incredible progress and prosperity.

Unfortunately, the voice of El Yezdi has fallen silent just as a controversial alliance is about to be formed with the Central German Confederation. More suspicious still are the disappearances of a number of England’s most brilliant thinkers and builders, with no clue as to who is responsible.

Now, aided by his own circle of unlikely and unconventional allies—including the devilishly lewd poet Algernon Swinburne—Sir Richard must delve into the darkest reaches of both the mystical and machine worlds if England is to survive a coming storm unlike anything ever imagined…