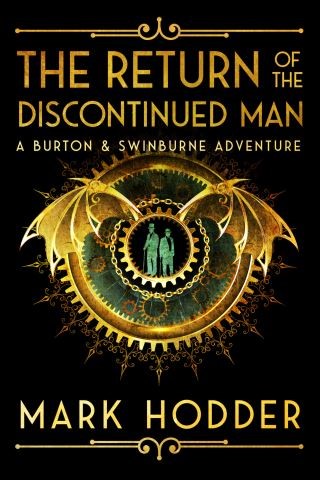 The Return of the Discontinued Man

Philip K. Dick Award-winning author Mark Hodder continues his Burton & Swinburne Adventures in an electrifying tale in which the future and the past collide―and the world itself may be altered forever…

Years ago, a madman from the future assassinated the beloved Queen Victoria―which inadvertently sparked the explosion of scientific and industrial advancement that thrust England into a technological age beyond anything ever imagined. And the effects of that event are about to be felt more than ever.

When a renowned scientist attempts to experiment on the assassin’s time-travelling suit, he unleashes a wave of chaos and conflicting timelines, resulting in blood red snow falling from the sky, and the adventurer Sir Richard Burton being tormented by jarring visions of alternate realities that are somehow both unavoidable and yet changeable. Time and reality may have just reached their breaking point.

But most disturbing of all, the legendary Spring Heeled Jack has returned―in several different places at the same time! These numerous “Jacks” are all very confused, very irritable, and very dangerous…

And they are all looking for Sir Richard Burton.