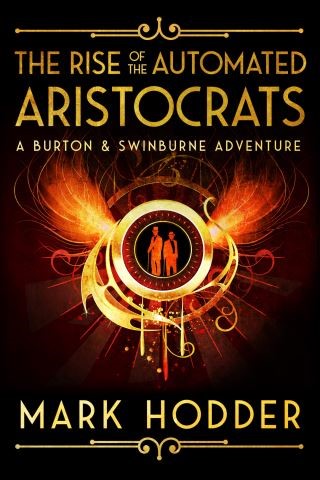 The Rise of the Automated Aristocrats

Time is twisted, worlds are changed, and fates are intertwined in this thrilling final chapter of the Burton & Swinburne Adventures from Philip K. Dick Award-winning author Mark Hodder.

Until he was suddenly alive, young and strong in the year 1864—a past that he remembers well, but which is definitely different from what he previously lived through. Burton’s amazement is heightened when he is reunited with his loyal friend, the eccentric poet Algernon Swinburne, who is equally nonplussed at being somehow transported into his former self at the moment of death.

Before long, Burton and Swinburne—joined by many of their brave compatriots—find themselves once again being pulled to and fro by the streams of time in an adventure that may decide the fate of humanity.

For while Burton, Swinburne and company have employed time travel to save the empire and her subjects, that technology has now fallen into the wrong hands. England’s ruling class are transforming Burton and Swinburne’s beloved England into a nightmare where those in power—along with their merciless clockwork enforcers—oppress and enslave the masses.

And now, Burton and his friends will have to find a way to heal the damage time travel has done to the world if they are ever going to save it…