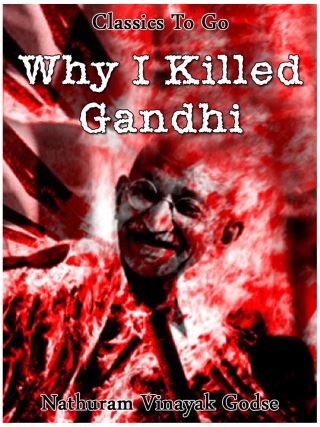 Why I killed Gandhi

Godse approached Gandhi on January 30, 1948 during the evening prayer at 5:15PM. When Godse bowed, one of the girls flanking and supporting Gandhi, said to Godse, "Brother, Bapu is already late" and tried to put him off, but he pushed her aside and shot Gandhi in the chest three times at point-blank range with a semi-automatic pistol. Gandhi was taken to Birla-House, where he later died. This is the autobiography of Gandhi's killer. (Excerpt from Wikipedia)

Nathuram Vinayak Godse: Nathuram Vinayak Godse (19 May 1910 – 15 November 1949) was the assassin of Mahatma Gandhi, who shot Gandhi in the chest three times at point blank range in New Delhi on 30 January 1948. Godse, an advocate of Hindu nationalism, from Pune, Maharashtra, who believed Gandhi to have favoured the political demands of India's Muslims during the partition of India, plotted the assassination with Narayan Apte and six others. After a trial that lasted over a year, Godse was sentenced to death on 8 November, 1949. Although pleas for commutation were made by Gandhi's two sons, Manilal Gandhi and Ramdas Gandhi, they were turned down by India's prime minister Jawaharlal Nehru, deputy prime minister Vallabhbhai Patel, and the Governor-General C. Rajagopalachari. Godse was hanged in the Ambala Central Jail on 15 November 1949. (Wikipedia)