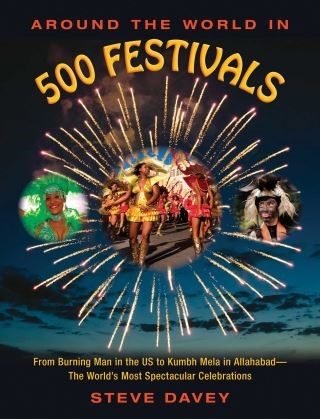 Around the World in 500 Festivals

Thousands of festivals take place around the world every year. Some have cult followings with tickets that sell out instantlyforty thousand Burning Man tickets sold out in a manner of minutessome are thrown in little-known faraway placescities in Benin or San Marino.

In this unique volume, Steve Davey, author of the 300,000+ selling book Unforgettable Places to See Before You Die, has created the ultimate, unparalleled book on the subject, showcasing a whopping 500 festivals in 121 countriesfar and away more than any other book of its kind. To make it, he traveled the world, comprehensively researched its most dynamic events, and carefully selected the festivals with the most extraordinary highs, a life-affirming buzz.

The result is scene-setting descriptions and 270 complementary jaw-dropping photographscolorful images on every page. It’s an energetic celebration of events from Carnival in Rio to the Full Moon Party in Thailand, from the most brilliant Day of the Dead celebrations to the gooiest food fights, the most over-the-top costumes to the most daring displays of bravado.

For ease of reference, the festivals are organized by continent, by region, then alphabetically by country. With dates and locations, they’re made accessible to those looking to enhance upcoming trips and those looking for their next big adventure. The compilation is also an instant thrill for the armchair travelerimmediate access to the world’s most joyful events.

Around the World in 500 Festivals was published in a limited print-run in 2013. It’s now being given a comprehensive update and new packaginga thrilling new offering for readers looking to experience new places and cultures when they’re most alive.

Steve Davey: Steve Davey is a writer and photographer whose work has appeared in magazines, books, and newspapers around the world. He is the author and principal photographer of Unforgettable Places to See Before You Die, which has sold more than 300,000 copies, Unforgettable Islands to Escape to Before You Die, and Footprint Travel Photography. He lives in London, England.