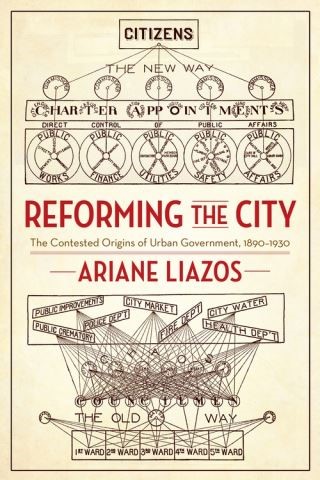 Most American cities are now administered by appointed city managers and governed by councils chosen in nonpartisan, at-large elections. In the early twentieth century, many urban reformers claimed these structures would make city government more responsive to the popular will. But on the whole, the effects of these reforms have been to make citizens less likely to vote in local elections and local governments less representative of their constituents. How and why did this happen?

Ariane Liazos examines the urban reform movement that swept through the country in the early twentieth century and its unintended consequences. Reformers hoped to make cities simultaneously more efficient and more democratic, broadening the scope of what local government should do for residents while also reconsidering how citizens should participate in their governance. However, they increasingly focused on efficiency, appealing to business groups and compromising to avoid controversial and divisive topics, including the voting rights of African Americans and women. Liazos weaves together wide-ranging nationwide analysis with in-depth case studies. She offers nuanced accounts of reform in five cities; details the activities of the National Municipal League, made up of prominent national reformers and political scientists; and analyzes quantitative data on changes in the structures of government in over three hundred cities. Reforming the City is an important study for American history and political development, with powerful insights into the relationships between scholarship and reform and between the structures of city government and urban democracy.