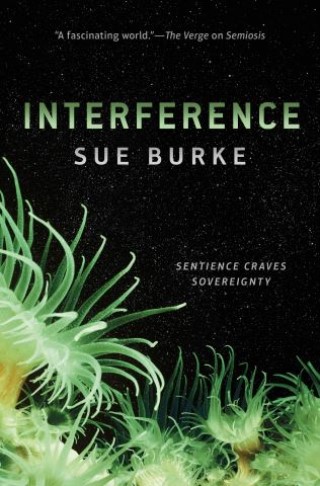 Sue Burke's sweeping, award-finalist, SF Semiosis epic continues in Interference as the colonists and a team from Earth confront a new and more implacable intelligence.

Over two hundred years after the first colonists landed on Pax, a new set of explorers arrives from Earth on what they claim is a temporary scientific mission.

But the Earthlings misunderstand the nature of the Pax settlement and its real leader. Even as Stevland attempts to protect his human tools, a more insidious enemy than the Earthlings makes itself known.

Stevland is not the apex species on Pax.

Sue Burke: SUE BURKE spent many years working as a reporter and editor for a variety of newspapers and magazines. A Clarion workshop alumnus, Burke has published more than thirty short stories in addition to working extensively as a literary translator. Interference is the sequel to her debut novel Semiosis. She now lives in Chicago.