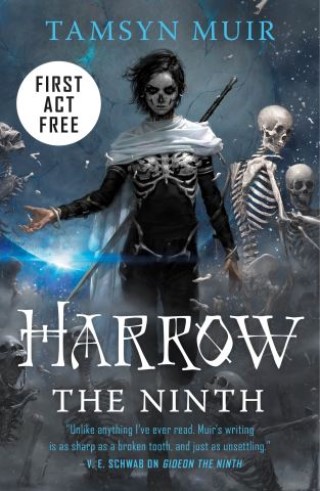 Harrow the Ninth: Act One

Can't wait to read Harrow the Ninth, the sequel to the sensational, USA Today best-selling novel Gideon the Ninth? Check out this free ebook preview and read the whole first act early. Harrow the Ninth is available for pre-order now, and on-sale everywhere August 4, 2020.

She answered the Emperor's call.

She arrived with her arts, her wits, and her only friend.

In victory, her world has turned to ash.

After rocking the cosmos with her deathly debut, Tamsyn Muir continues the story of the penumbral Ninth House in Harrow the Ninth, a mind-twisting puzzle box of mystery, murder, magic, and mayhem. Nothing is as it seems in the halls of the Emperor, and the fate of the galaxy rests on one woman's shoulders.

Harrowhark Nonagesimus, last necromancer of the Ninth House, has been drafted by her Emperor to fight an unwinnable war. Side-by-side with a detested rival, Harrow must perfect her skills and become an angel of undeath — but her health is failing, her sword makes her nauseous, and even her mind is threatening to betray her.

Sealed in the gothic gloom of the Emperor's Mithraeum with three unfriendly teachers, hunted by the mad ghost of a murdered planet, Harrow must confront two unwelcome questions: is somebody trying to kill her? And if they succeeded, would the universe be better off?

Tamsyn Muir: TAMSYN MUIR is the author of the Locked Tomb Trilogy, which begins with Gideon the Ninth, continues with Harrow the Ninth, and concludes with Alecto the Ninth. Her short fiction has been nominated for the Nebula Award, the Shirley Jackson Award, the World Fantasy Award and the Eugie Foster Memorial Award. A Kiwi, she has spent most of her life in Howick, New Zealand, with time living in Waiuku and central Wellington. She currently lives and works in Oxford, in the United Kingdom.