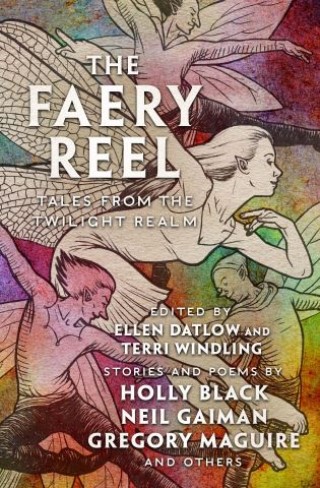 Tales from the Twilight Realm

This “wondrous” collection of fantasy tales from Neil Gaiman, Patricia A. McKillip, and others “is a treasure chest. Open it and revel in its riches” (Kirkus Reviews, starred review).

For this enchanting anthology—a World Fantasy Award finalist—editors Ellen Datlow and Terri Windling “asked their contributors to reimagine Fäerie” in the present day, or “search its more dimly lit pathways,” and the authors have responded with bountiful imagination. The title piece is a poem by Neil Gaiman, but most of the others are longer pieces, “like shards of stories you want to hear more of.” Jeffrey Ford “limns the heartbreaking tale” of fairies who live in sandcastles built by young children; Ellen Steiber’s ‘Screaming for Fairies’ “sketches the lineaments of desire.” Bruce Glassco “finds a different voice for Tinkerbell and Captain Hook in ‘Never Never.’” Tanith Lee’s ‘Elvenbrood’ tale is eerie and “chilling.” Gregory Maguire, Nina Kiriki Hoffman, Patricia A. McKillip, and Emma Bull’s stories all “enchant” and bewitch. Delia Sherman’s ‘CATNYP’ is “both funny and deeply clever, warming the cockles of anyone who has ever had dealings with a research library, especially New York Public’s” (Kirkus Reviews, starred review).

This companion volume to The Green Man: Tales from the Mythic Forest is “a rewarding choice for those who like the traditional with a twist” (Booklist).

Ellen Datlow:
Ellen Datlow, an acclaimed science fiction and fantasy editor, was born and raised in New York City. She has been a short story and book editor for more than thirty years and has edited or coedited several critically acclaimed anthologies of speculative fiction, including the Year’s Best Fantasy and Horror series and Black Thorn, White Rose (1994) with Terri Windling. Datlow has received numerous honors, including multiple Shirley Jackson, Bram Stoker, Hugo, Locus, and World Fantasy Awards, and Life Achievement Awards from the Horror Writers Association and the World Fantasy Association, to name just a few. She resides in New York.
Terri Windling is a writer, editor, and artist specializing in fantasy literature, folklore, and mythic arts. She has published over forty books, receiving nine World Fantasy Awards, the Mythopoeic Award (for her novel The Wood Wife), the Bram Stoker Award, and the SFWA’s Solstice Award for “outstanding contributions to the speculative fiction field as a writer, editor, artist, educator, and mentor.” She writes essays on folklore and fantasy; maintains a popular blog on these subjects (Myth & Moor); and is on the board of the Chichester Centre for Fairy Tales, Folklore, and Speculative Fiction (Chichester University). She also creates myth-inspired visual art for exhibition in the US and Europe; and she’s a member of the Modern Fairies music-and-folklore project (Oxford & Sheffield Universities). A former New Yorker, she now lives with her British husband and family in Devon, England.