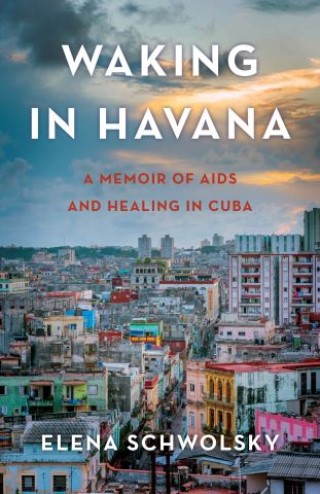 A Memoir of AIDS and Healing in Cuba

In 1972, when she was a young, divorced, single mother, restless and idealistic, Elena Schwolsky made a decision that changed her life: leaving her eighteen-month-old son with his father, she joined hundreds of other young Americans on a work brigade in Cuba. They spent their days building cinderblock houses for workers and their nights partying and debating politics. The Cuban revolution was young, and so were they. At a moment of transition in Schwolsky’s life, Cuba represented hope and the power to change.
Twenty years later, she is drawn back to this forbidden island, yearning to move out of grief following the death of her husband from AIDS and feeling burned out after spending ten years as a nurse on the frontlines of the epidemic. Back in Cuba, she experiences the chaotic bustle of a Havana most Americans never see—a city frozen in time yet constantly changing. She takes readers along with her through her humorous attempts to communicate in a new language and navigate this very different culture—through the leafy tranquility of the controversial AIDS Sanitorium and into the lives of the resilient, opinionated, and passionate Cubans who become her family and help her to heal.