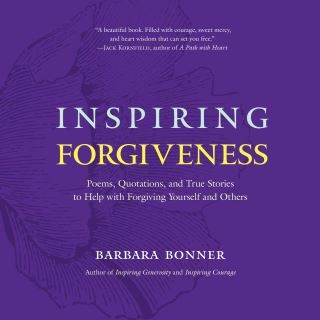 Poems, Quotations, and True Stories to Help with Forgiving Yourself and Others

An encouraging guide for the angry or heartbroken soul, in the form of uplifting stories and quotations.

Sometimes forgiveness can feel unfathomable, unreachable, or even just plain wrong. Inspiring Forgiveness throws wide open the doors of possibility within the human heart with the wise words of philosophers, writers, poets, and great thinkers from across centuries and continents. Each offering can serve as guideposts along the path to bringing greater forgiveness into our lives. This book also tells the stories of real-world people—from the Dalai Lama to Congressman John Lewis and more—whose lives were changed forever by forgiveness, including for themselves. Just bearing witness to these experiences can itself be transformative.

One wise teacher quoted in this book, Pema Chödrön, offers a simple practice for cultivating forgiveness: “First we acknowledge what we feel—shame, revenge, embarrassment, remorse. Then we forgive ourselves for being human. Each moment is an opportunity to make a fresh start.” This book is a collection of those moments.

Inspiring Forgiveness consists of twelve true stories of people who have endured great pain at the hands of others and have found a way to open themselves to forgiveness in its many forms. Each story is followed by extraordinary poems that speak to forgiveness as well as a collection of over 100 inspiring quotations.

“What a wonderful illumination of the power of forgiveness Barbara Bonner has given us. The book’s unique gathering of personal stories, poems, and quotations shows that forgiveness is not a momentary feeling but an attitude toward life, a practice of deep self-healing, and a path to freedom. Inspiring Forgiveness is aptly titled, for it does more than tell us about forgiveness, it inspires us to live it.”
—John Brehm, editor of The Poetry of Impermanence, Mindfulness, and Joy

Barbara Bonner: After starting her professional life as an art historian, Barbara Bonner has devoted her career to nonprofit management, fundraising and philanthropy. In New York she held leadership positions in three of the city’s distinguished museums. She then served as Vice President of Bennington College and of the Kripalu Center for Yoga and Health. Since 2009 she has had her own consulting company that helps nonprofit organizations transform their board leadership and philanthropic support. In addition, Barbara has served on ten nonprofit boards, most recently as Board Chair of The Barre Center for Buddhist Studies. Several years ago she started a major fund for helping women with cancer in her region. After 30 years in New York City, Barbara now lives in a converted barn in the Berkshire hills of Western Massachusetts.