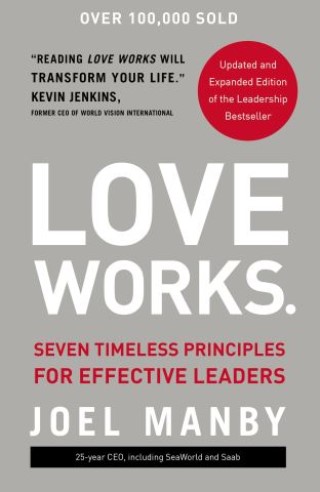 Updated and Expanded Edition of the Leadership Bestseller

Harness the meaning of love, the verb, to improve your corporate culture and bottom line with the help of Joel Manby, former President and CEO of both SeaWorld Parks & Entertainment and Herschend Enterprises. Joel won the respect of America with his appearance on the CBS reality TV series Undercover Boss.

A highly successful corporate executive, Joel Manby is unlike most other CEOs. As the 18 million viewers of Undercover Boss witnessed, Manby has a unique style of leadership--servant leadership--which has a profound impact on his employees.

In this updated and expanded edition of Love Works, Manby demonstrates that leading with love is effective even in extremely difficult business environments, which he experienced at SeaWorld. With an all-new introduction and two additional chapters, Manby shares more of his own leadership and personal stories, giving insight that will help you become a more effective leader by:

Discover the truth of the power of love to change the course of your business and your life today!

Joel Manby, former President and Chief Executive Officer of SeaWorld Parks & Entertainment, served the company through its most difficult time and the start of its subsequent turnaround. Prior to SeaWorld, Joel was the President and Chief Executive Officer of Herschend Enterprises, the largest family-owned theme park and entertainment company in the United States. Before Herschend, he served as the CEO of Saab Cars North America.

Manby has incorporated the definition of love, the verb, into his leadership philosophy to establish how true leaders are to behave. He views love as a mode of thinking—one that has helped him deliver tangible results.

While at Herschend Enterprises, Joel was featured on the hit CBS show Undercover Boss. He and the employees of Herschend inspired millions of viewers across the world with their unique approach to leadership.

Joel received an M.B.A. from Harvard Business School and a B.A. from Albion College. Currently, he is the Chairman of the Board of Orange, whose mission is to develop innovative church curriculum and provide tools that enable families to learn biblical virtues in the home, church and school. He also serves as a member of the National Advisory Board of The Salvation Army.