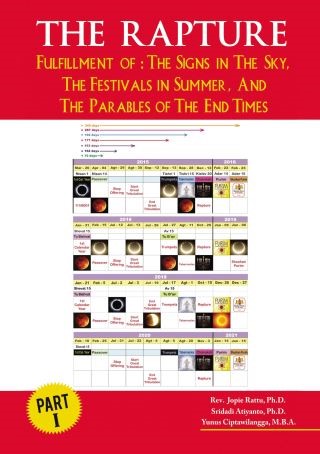 The Rapture Part I

Fullfillment of : The Signs in The Sky, The Festivals in Summer, and The Parables of The End Times

In this first part of the book, the authors present very basic things that should be known by Christians, namely, things relating to the end times which include:

This section explains the link between "Biochip" and 666 and the reasons and verses that explain why God's children may not accept chip666. What are the consequences for a child of God who receives Chip666 and what is the fate of a child of God who refuses to accept it.

The rapture will occur after the time of tribulation but before the vials of God's wrath. This means that God's children will experience persecution.

When the appearance of two witnesses of God and what are their duties.

Because at the end times all of God's children will experience persecution, so much preparation must be done. Where the preparation is not only related to the physical but primarily spiritual preparation that requires time and sincerity.

In addition, at the end of this book, the estimated “The Book of Revelation in a New Structure” is included.