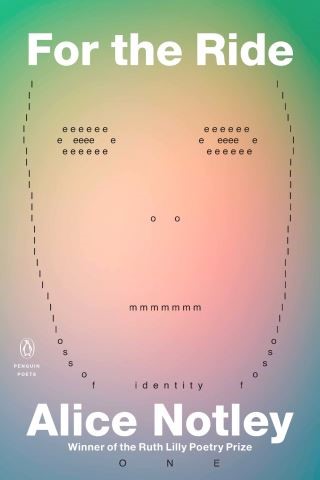 A major new book-length visionary poem from a writer "whose poems are among the major astonishments of contemporary poetry" (Robert Polito, the Poetry Foundation)

Alice Notley has become one of the most highly regarded figures in American poetry, a master of the visionary mode acclaimed for genre-bending, book-length poems of great ambition and adventurousness. Her newest book, For the Ride, is another such work. The protagonist, "One," is suddenly within the glyph, whose walls project scenes One can enter, and One does so. Other beings begin to materialize, and it seems like they (and One) are all survivors of a global disaster. They board a ship to flee to another dimension; they decide what they must save on this Ark are words, and they gather together as many as are deemed fit to save. They "sail" and meanwhile begin to change the language they are speaking, before disembarking at an abandoned future city.

Alice Notley: Alice Notley was born in Bisbee, Arizona, in 1945 and grew up in Needles, California. She is the author of more than thirty-five books of poetry, including Mysteries of Small Houses (Penguin, 1998, winner of the Los Angeles Times Book Prize and a finalist for the Pulitzer Prize); Disobedience (Penguin, 2001, winner of the Griffin Prize); and Grave of Light: New and Selected Poems 1970-2005, which received the Lenore Marshall Poetry Prize. Her honors also include an Academy Award in Literature from the American Academy of Arts and Letters and the Shelley Memorial Award from the Poetry Society of America. She lives and works in Paris.