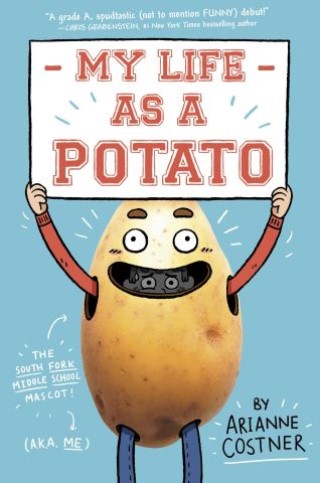 My Life as a Potato

For anyone who has ever felt like a potato in middle school, this hilarious story about a boy forced to become the dorkiest school mascot ever will have readers cheering!

Ben Hardy believes he's cursed by potatoes. And now he's moved to Idaho, where the school's mascot is Steve the Spud! Yeah, this cannot be good.

After accidentally causing the mascot to sprain an ankle, Ben is sentenced to Spud duty for the final basketball games of the year. But if the other kids know he's the Spud, his plans for popularity are likely to be a big dud! Ben doesn't want to let the team down, so he lies to his friends to keep it a secret. No one will know it's him under the potato suit . . . right?

Life as a potato is all about not getting mashed! With laugh-out-loud illustrations throughout, hand to fans of James Patterson, Gordan Korman, Jeff Kinney, and Chris Grabenstein!

"A hilarious, relatable story for any kid who has ever felt out of place." --Stacy McAnulty, author of The Miscalculations of Lightning Girl

Arianne Costner: ARIANNE COSTNER is a former English teacher who firmly believes that writers should crack up at their own jokes. Born and raised in Mesa, Arizona as the oldest of five, she currently lives outside of Los Angeles, California with her husband and children. Her favorite kind of potato is the tater tot, with mashed potatoes coming in close second--as long as they're not gluey. Visit her at ariannecostner.com and follow her on Twitter at @ariannecostner and on Instagram @authorariannecoster.