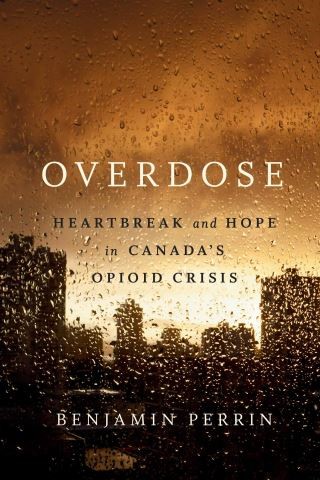 “Overdose is a necessary and searching investigation into a devastating epidemic that should never have happened. Benjamin Perrin painstakingly shows that it need not continue if we, as a society, heed the evidence.”
—Gabor Maté M.D., author of In The Realm of Hungry Ghosts: Close Encounters With Addiction

An astonishing and powerful look at the ongoing opioid crisis

North America is in the middle of a health emergency. Life expectancies are declining. Someone is dying every two hours in Canada from illicit drug overdose. Fentanyl has become a looming presence—an opioid more powerful, pervasive, and deadly than any previous street drug.

The victims are many—and often not whom we might expect. They include the poor and forgotten but also our neighbours: professionals, students, and parents. Despite the thousands of deaths, these victims have remained largely invisible.

But not anymore. Benjamin Perrin, a law and policy expert, shines a light in this darkest of corners—and his findings challenge many assumptions about the crisis. Why do people use drugs despite the risk of overdosing? Can we crack down on the fentanyl supply? Do supervised consumption sites and providing “safe drugs” enable the problem? Which treatments work? Would decriminalizing all drugs help or do further harm?

In this urgent and humane look at a devastating epidemic, Perrin draws on behind-the-scenes interviews with those on the frontlines, including undercover police officers, intelligence analysts, border agents, prosecutors, healthcare professionals, Indigenous organizations, activists, and people who use drugs. Not only does he unveil the many complexities of this situation, but he also offers a new way forward—one that may save thousands of lives.

Benjamin Perrin: BENJAMIN PERRIN is a professor at the University of British Columbia, Peter A. Allard School of Law. He served as a law clerk at the Supreme Court of Canada, and was the lead justice and public safety advisor to Prime Minister Stephen Harper from 2012-13. Professor Perrin is the author of two previous books: Invisible Chains: Canada's Underground World of Human Trafficking, which was a national bestseller and named one of the top books of the year by The Globe and Mail, and Victim Law: The Law of Victims of Crime in Canada. He lives in Vancouver, BC.