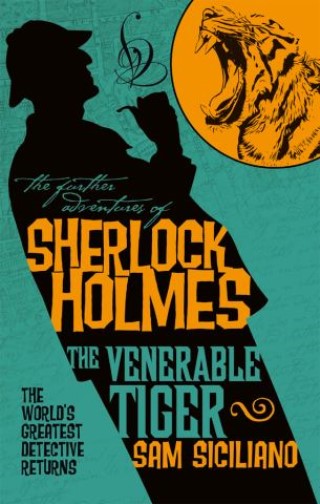 The Further Adventures of Sherlock Holmes - The Venerable Tiger

The brand new adventure from the author of The Devil and the Four, in which Sherlock Holmes and Henry Vernier uncover a tense family mystery.

Sherlock Holmes acquires a new client when a beautiful young woman, Isabel Stone, faints on the steps of his Baker Street rooms. She has come to beg his assistance in reclaiming the priceless jewels kept from her by her tyrannical stepfather, Captain Grimbold Pratt. But shortly after agreeing to take her case, Captain Pratt comes to Baker Street, furious that Isabel is trying to deprive him of his fortune. Unsure who to believe, Holmes and his cousin, Dr Henry Vernier, must travel to Pratt's estate, home to tigers, wolves and murderers, to unravel a family mystery dating back to the Indian Mutiny.

Sam Siciliano: Sam Siciliano is the author of several novels, including the Sherlock Holmes titles The Angel of the Opera, The Web Weaver, The Grimswell Curse and The White Worm. He lives in Vancouver, Washington