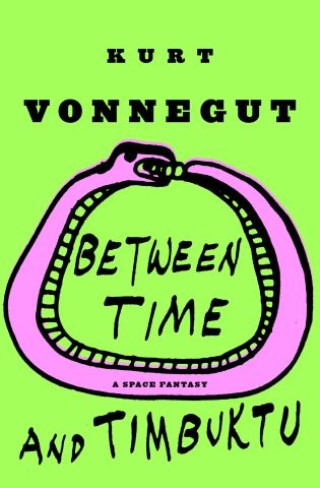 Between Time and Timbuktu

Or, Prometheus-5, a Space Fantasy

An experimental television play composed of excerpts from his novels and stories, Between Time and Timbuktu features Kurt Vonnegut’s special blend of scientific expertise, wit, and penetrating comment.

“Most unusual, ultra imaginative . . . a sort of cross between 2001: A Space Odyssey and Alice in Wonderland.”—Philadelphia Inquirer

The basic story line: Young Stony Stevenson wins a jingle contest and, as his prize, is blasted off into the time-space warp. The country’s first poet-astronaut thus experiences both past and future human history simultaneously. His observations on it consist mainly of dramatized selections from the author’s works. The result is a unique Vonnegut sampler cast in the form of “an excellent drama” (Pittsburgh Press).

Kurt Vonnegut: Kurt Vonnegut was a master of contemporary American literature. His black humor, satiric voice, and incomparable imagination first captured America’s attention in The Sirens of Titan in 1959 and established him, in the words of The New York Times, as “a true artist” with the publication of Cat’s Cradle in 1963. He was, as Graham Greene declared, “one of the best living American writers.” Mr. Vonnegut passed away in April 2007.