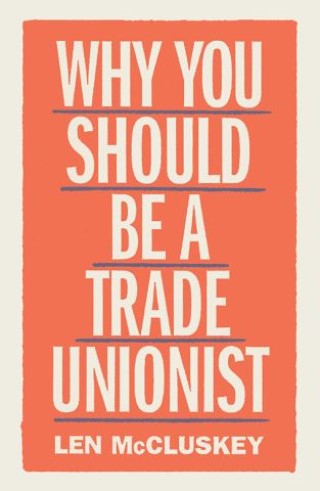 Why You Should be a Trade Unionist

Why every worker should join a union

In this short and accessible book, Len McCluskey, General Secretary of Unite the Union, presents the case for joining a union. Drawing on anecdotes from his own long involvement in unions, he looks at the history of trade unions, what they do and how they give a voice to working people, as democratic organisations. He considers the changing world of work, the challenges and opportunities of automation and why being trade unionists can enable us to help shape the future. He sets out why being a trade unionist is as much a political as it is an industrial role and why the historic links between the labour movement and the Labour Party matter. Ultimately, McCluskey explains how being a trade unionist means putting equality at work and in society front and centre-stage, fighting for an end to discrimination, and to inequality in wages and power.

Len McCluskey: Len McCluskey is General Secretary of Unite the Union, the largest affiliate and a major donor to the Labour Party. As a young adult, he spent some years working in the Liverpool Docks for the Mersey Docks and Harbour Company prior to becoming a full-time union official for the Transport and General Workers' Union (T&GWU) in 1979. McCluskey was elected as the general secretary of Unite in 2010, and was re-elected to his post in 2013 and 2017. He has been a prominent backer and supporter of Labour leader Jeremy Corbyn.