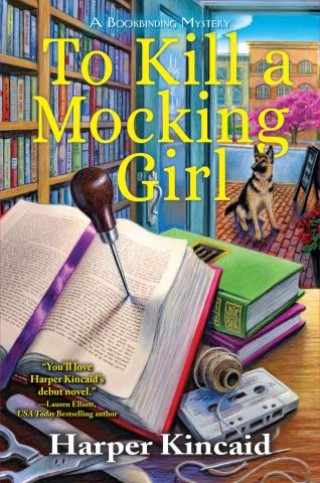 To Kill a Mocking Girl

Bookbinder Quinn finds herself in trouble when her ex's fiance turns up dead and if she's not careful, her days might be numbered in this debut series perfect for fans of Kate Carlisle and Eva Gates.

Quinn Victoria Caine is back in her quirky town of Vienna, Virginia, starting her new life as a bookbinder in her family-owned, charm-for-days bookshop, Prose & Scones. With her trusty German Shephard RBG-'Ruff Barker' Ginsburg by her side, what can go wrong? Okay, sure, bumping into her ex, Scott, or her former high school nemesis, Tricia, is a drag. It certainly doesn't help they have acquired the new hobby of shoving their recent engagement in her face every chance they get. But that doesn't mean Quinn wanted to find Tricia dead in the road. So why does half the town think she may have done it?

Quinn is determined to find Tricia's killer, even if it means partnering with her cousin-turned-nun, Sister Daria, and Detective Aiden Harrington, her older brother's too-movie-star-handsome-for-his-own good, best friend. They believe she's innocent, but of course that doesn't influence the police, who peg her as their prime suspect. Or, at least until she's poisoned.

But there is no way Quinn is going to stop now. Vienna is her town and-for better or worse-Tricia was one of their own. Someone may have killed the mocking girl, but no one's going to stop the notorious QVC.

Harper Kincaid: Born in California and raised in South Florida, Harper Kincaid has moved around like a nomad with a bounty on her head ever since. After earning her master's degree in Gender History and another in Clinical/Macro Social Work, Kincaid decided to not to use either and become a writer instead.