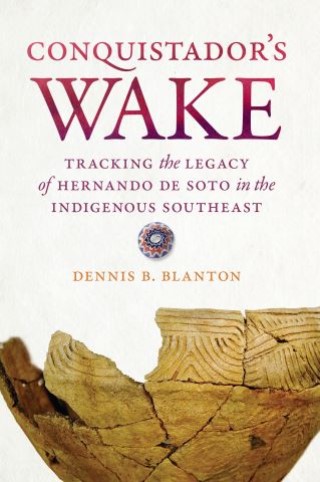 Tracking the Legacy of Hernando de Soto in the Indigenous Southeast

The focus of Conquistador’s Wake is a decade-long archaeological project undertaken at a place now known as the Glass Site, located in Telfair County, Georgia. This spot, near the town of McRae, Georgia, offers clues that place Hernando de Soto in Georgia via a different route than previously thought by historians and archaeologists.

Rare glass beads—some of the only examples found outside Florida—are among the rich body of evidence signaling Spanish interaction with the Native Americans along the Ocmulgee River. An unusual number and variety of metal and glass artifacts, identified by their distinct patterns and limited production, are the “calling cards” of Soto and other early explorers.

As a meditation on both the production of knowledge and the implications of findings at the Glass Site, Conquistador’s Wake challenges conventional wisdom surrounding the path of Soto through Georgia and casts new light on the nature of Native American societies then residing in southern Georgia. It also provides an insider’s view of how archaeology works and why it matters.

Through his research, Dennis Blanton sets out to explain the outcome of one of Georgia’s, and the region’s, most important archaeological projects of recent years. He tells at the same time a highly personal story, from the perspective of the lead archaeologist, about the realities of the research process, from initial problem formulation to the demands of fieldwork, the collaborative process, data interpretation, and scholarly tribalism.