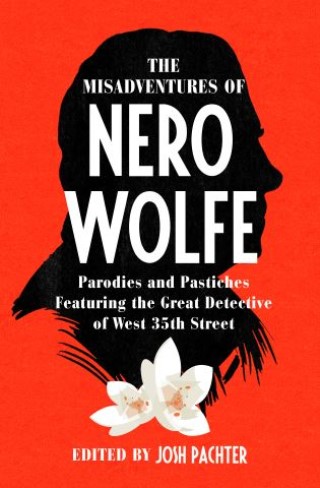 The Misadventures of Nero Wolfe

If imitation is the sincerest form of flattery, then Nero Wolfe and Archie Goodwin have been widely flattered almost from the moment Rex Stout first wrote about them in 1934. The Misadventures of Nero Wolfe collects two dozen literary tributes to one of crime fiction’s best-loved private detectives and his Man Friday. Included are:

Also featuring a reminiscence from Rex Stout’s daughter, this is a treasury of witty and suspenseful crime writing for every fan of the portly private detective.

Robert Goldsborough: Robert Goldsborough is an American author best known for continuing Rex Stout’s famous Nero Wolfe series. Born in Chicago, he attended Northwestern University and upon graduation went to work for the Associated Press, beginning a lifelong career in journalism that would include long periods at the Chicago Tribune and Advertising Age. While at the Tribune, Goldsborough began writing mysteries in the voice of Rex Stout, the creator of iconic sleuths Nero Wolfe and Archie Goodwin. Goldsborough’s first novel starring Wolfe, Murder in E Minor (1986), was met with acclaim from both critics and devoted fans, winning a Nero Award from the Wolfe Pack. Archie Goes Home is the fifteenth book in the series.
Marvin Kaye (b. 1938) is the author of more than forty books. Born in Philadelphia, he attended college at the University of Pennsylvania, graduating with advanced degrees in theater and English literature. After reporting for the national newspaper Grit for several years, he moved to New York City and found work in publishing. He published his first nonfiction book, The Histrionic Holmes, in 1971, and followed it with the mystery novel A Lively Game of Death (1972), which introduced sleuthing public relations agent Hilary Quayle, Kaye’s most famous character.
In addition to five Quayle novels, Kaye has written and edited dozens of works of fiction and nonfiction. He is also one of the founders of the Open Book, New York City’s oldest continuously operating reading theater. In 2010, the theater produced Kaye’s Mister Jack, a comedy about Don Juan. Before his retirement, Kaye taught creative writing at New York University, and regularly performed improvised comedy at the Jekyll & Hyde Club.