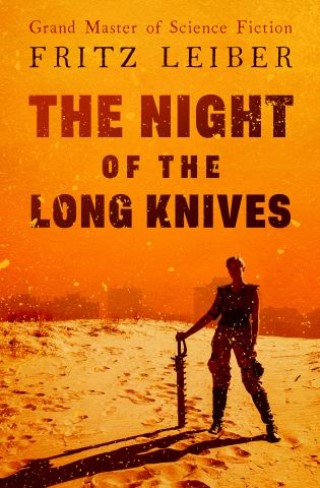 The Night of the Long Knives

A post-apocalyptic novel set in the nuclear wastelands of America from the Grand Master of Science Fiction and author of the Lankhmar series.

Ray is armed and dangerous, suspicious of everyone he comes across in the decimated Deathlands and willing to fight to the death as he scavenges for food and weapons. Into his life comes Alice, just as wary but whose intentions are not violent. The two drifters forge an uneasy truce, but their bloodlust will be tested when an old man—a former homicidal maniac—offers them something almost too painful to contemplate: hope.

“A dark, edgy story, Leiber deconstructs the madness of such aggression in turns overt and subtle. . . . The character study of a killer paranoid everyone is out to kill him . . . A hard-edged, slightly satirical look at mankind’s propensity toward murder in the context of free choice.” —Speculiction

“Vividly describes a horrifying possible future America where nuclear war has ravaged the land and the human brain.” —Fantasy Literature

Fritz Leiber:
Fritz Leiber (1910–1992) was the highly acclaimed author of numerous science fiction stories and novels, many of which were made into films. He is best known as creator of the classic Lankhmar fantasy series. Leiber has won many awards, including the coveted Hugo and Nebula, and was honored as a lifetime Grand Master by the Science Fiction Writers of America.