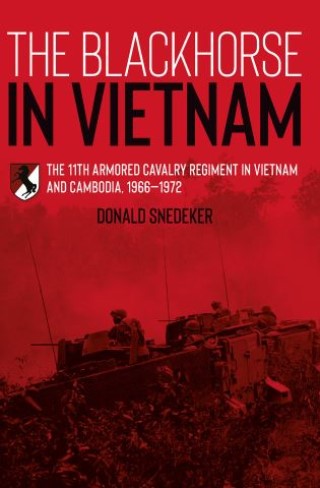 The Blackhorse in Vietnam

This military history chronicles the combat operations of the Blackhorse Regiment, which paved the way for armored cavalry tactics in the Vietnam War.

South Vietnam, September 1966. When the 11th Armored Cavalry Regiment came ashore at Vung Tau, it faced a number of challenges. In addition to the threat of the Viet Cong and the North Vietnamese Army, the terrain and weather posed their own dangers, adversely affecting the use of bulletproof vehicles and helicopters. The dearth of doctrine and tactics for the employment of armored cavalry in a counterinsurgency was equally challenging—especially during pre-deployment training and initial combat operations. But despite all this, the leaders of Blackhorse Regiment found a way to accomplish their mission.

Within a year of their arrival in Vietnam, Blackhorse troopers overcame ambushes that featured anti-tank weapons, numerous landmines, and coordinated assaults. They not only defeated an enemy division twice their size, but also demonstrated how to succeed while operating on and off the roads, in the jungle, and during both the wet and dry seasons. By the spring of 1967, army leaders were beginning to realize the value of troops stationed in Vietnam. And with the Blackhorse Regiment leading the way, armor came to be considered an essential part of the combat team.

Written by a Blackhorse veteran, this regiment history features firsthand accounts from soldiers who served in Vietnam and Cambodia.