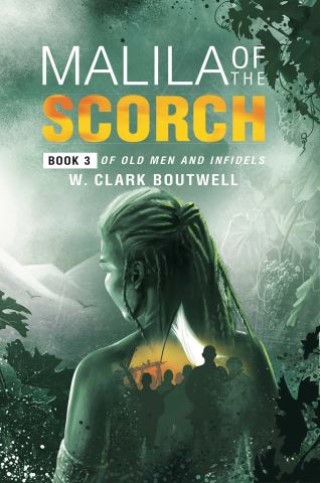 Malila Of The Scorch

Book 3 of Old Men and Infidels

For the Unity, the lone surviving high-tech and forward-thinking remnant of a once-vital America, war represents a final chance to liberate the backward and unfashionable Midlands from their centuries-long nightmare of freedom and self-determination.

Young Malila Chiu, once a hero of the Unity, emerges from the jungle to deliver a dire message to a beleaguered America: the Deep Scorch, a polyarchy of sentient plants, declares itself to be a potent ally—or a dangerous foe. Familiar and distrustful of the Scorch for much of his long life, Jesse Johnstone stays by Malila’s side for the sake of their love.

The grand architect of the war, Unity General Eustace Jourdaine, recovering from grievous injuries, rallies to lead his troops into battle in the hopes of winning a new empire—but for whom?

All the while, within the bowels of the Unity, American spies, William Butler, Hecate, and Elise, delve into the secrets of the CORE and their own mortality to thwart the invasion.

Even as combat and betrayal swirl around him, the Old Man learns too late that this latest battle with the Unis may be his final one.

Malila of the Scorch completes the Malila/Jesse Trilogy that started with Outland Exile and continued with Exiles’ Escape.

W. Clark Boutwell: Born in Chicago and raised outside Philadelphia, Clark, a physician, has taught and practiced intensive care for newborn infants on four continents and eight countries, as he continues to do after more than forty-five years on the job. He lives with his bride of over 40 years in Alabama. He has been an avid solo hiker, backpacker, and climber since he was a mere lad of 11. Some of his stories are true. He has traveled extensively to Rwanda, Kenya, India, Ecuador, Zambia, and Ghana as a volunteer physician. "Outland Exile," a Pinnacle award recipient, (iUniverse, Oct 2015) and Exiles' Escape (Indigo River Feb 2018 and also a Pinnacle awardee) are the first two of an expected five-book series called "Old Men and Infidels" centering on aging, medical care, drug use, cybernetics, society and faith in a future dystopian America. The third book (Malila of the Scorch) was released Nov 2019.