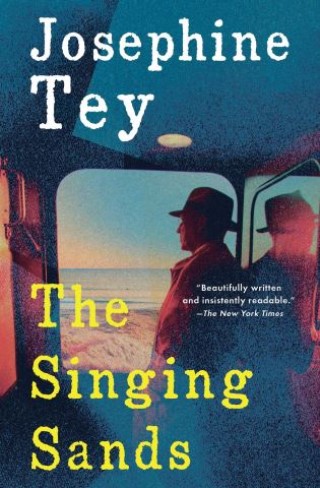 On sick leave from Scotland Yard, Inspector Alan Grant is planning a quiet holiday with an old school chum to recover from overwork and mental fatigue. Traveling on the night train to Scotland, however, Grant stumbles upon a dead man and a cryptic poem about “the stones that walk” and “the singing sand,” which send him off on a fascinating search into the verse’s meaning and the identity of the deceased. Grant needs just this sort of casual inquiry to quiet his jangling nerves, despite his doctor’s orders. But what begins as a leisurely pastime eventually turns into a full-blown investigation that leads Grant to discover not only the key to the poem but the truth about a most diabolical murder.

Josephine Tey: Josephine Tey began writing full-time after the successful publication of her first novel, The Man in the Queue (1929), which introduced Inspector Grant of Scotland Yard. She died in 1952, leaving her entire estate to the National Trust.Robert Barnard (1936-2013) was awarded the Malice Domestic Award for Lifetime Achievement and the Nero Wolfe Award, as well as the Agatha and Macavity awards. An eight-time Edgar nominee, he was a member of Britain's distinguished Detection Club, and, in May 2003, he received the Cartier Diamond Dagger Award for lifetime achievement in mystery writing. His most recent novel, Charitable Body, was published by Scribner in 2012.