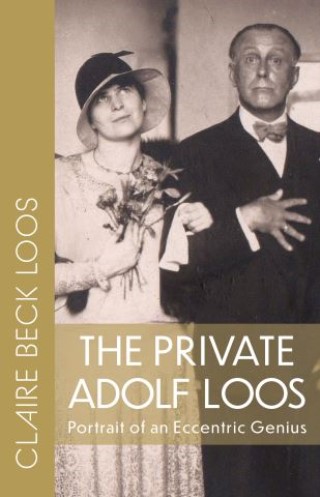 Portrait of an Eccentric Genius

• 2020 is the 150th anniversary of Adolf Loos’ birth. The Albertina in Vienna is planning an exhibition, among others, and Loos’ name will be in the public eye.

• Accessibly priced paperback of a Loosian love story is more than an architecture biography — it’s a story about the private life and bizarre mores of a genius as seen through the eyes of his wife, who was 34 years his junior.

• Bizarre stories with cinematic brevity and absurd situations: Imagine your husband introducing you completely naked to his subordinate carpenter in the pool of the Viennese Nudist League, where they proceed to discuss business. Imagine him buying out an entire concert hall and giving away tickets on the street to introduce the common man to Schoenberg’s atonal music. Imagine a man who reads the encyclopedia for amusement, front to back.

• Claire Beck’s documentation has ensured that Loos’ identity would not live on solely in the static shapes of architecture or through his essays, but as a man with a particular temperament and quirks that informed his genius.

• Photographs by Claire show another dimension to the love story: that he was her subject, and that part of her interest in him was also artistic, which informed her future photographic activities.

• Like a box of chocolates, this is a biography that's easy and fun to read piece by piece, a little at a time, or to devour all at once. It consists of more than five dozen short stories, some the length of a paragraph, some several pages.

• New insights gained into Loos projects through their creation stories: the unrealized black-and-white striped marble house for Josephine Baker (1928) with its dramatic lighting and view into the swimming pool, for example, or the interior of the Villa Müller (1928–30) in Prague with green marble imagined by Loos as a visual rhyme with shimmering fish.

• Loos’ philosophy and his spatial modeling system of the Raumplan — open-space architecture conceived in three-dimensions — is taught in every architecture school. His name is instantly recognizable and suggests controversy, innovation, and intrigue.

• Essays by Loos in the appendix give insight into how these controversies were established — by Loos himself, a provocateur and cultural critic.

• The book reflects not just Claire’s experience but also the zeitgeist that brought this Modern master to the fore and benefitted from his radical vision. He advocated a "socialist" future where every proletariat, through architecture, could become a liberated sophisticate.

• A traveling exhibition of the Western Bohemian Writers Society has introduced Claire and this book around Europe for the last two years, with several articles about her appearing in magazines with monthly circulations of 65,000-100,000. They are trying to get the show to London for 2020, which would create a natural market for this book.

• During his lifetime Loos designed, built, and remodeled close to one hundred apartments and homes, and undertook a number of large civic projects like schools, government buildings, and workers’ housing. Dozens of additional works include sanatoriums, hotels, shops, cafés and bars — notably Vienna's American Bar, featuring colorful stained glass and a death-defying marble ceiling that has never fallen down.

• While related to the hardcover edition, this is a streamlined version of that book geared to a larger market, with 20 photographs. Some of these are by Claire, some are of the two of them together, and one, never before published seems to have been taken by Loos of the author. Altogether they illustrate the theatricality of their relationship and suggest Loos as a character for a film or TV series that has never, surprisingly, been attempted, though it has apparently been discussed.

• Informative supplemental material enlarges the story beyond Loos by providing details about the author from family archives, love letters from Loos, and what is known about Claire and her photography practice before her untimely death in the Holocaust.