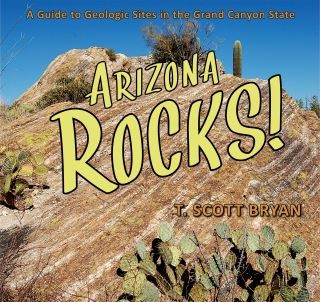 A Guide to Geologic Sites in the Grand Canyon State

Arizona is a geologist’s playground, with a scientifically intriguing story behind every rocky outcrop, dry playa, and sparkling spring. Arizona Rocks! tells the stories of 44 of the best geologic sites in the state. Not only will you learn about well-known places, such as Barringer Meteorite Crater and Petrified Forest National Park, you’ll also discover lesser-known sites, including Hopi Buttes, which formed from steam-driven explosions; Peridot Mesa, where gemstones from the Earth’s interior are found; and Montezuma Well, a limestone sinkhole with a perennial supply of water. Ample color photographs compliment the text, and maps help get you where you need to be. Arizona Rocks! is the second book in the state-by-state Geology Rocks! series, which introduces readers to some of the most compelling and accessible geologic sites in each state.