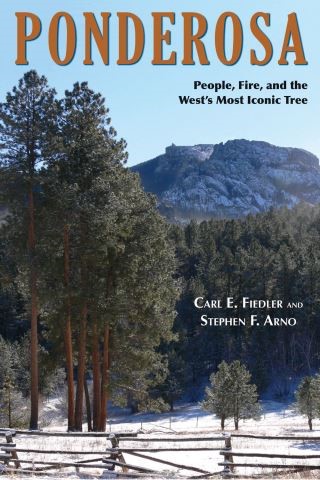 People, Fire, and the West's Most Iconic Tree

The West’s vast ponderosa pine forest has been home to people for thousands of years. Ponderosa from distant mountains provided timbers for the ancient pueblos of the Southwest. Nomadic Native Americans often wintered among the large pines and peeled bark for food in spring. Pioneers on horseback extolled the giant pines and grassy glades of yesterday’s forest. Ponderosa timber was used to build Gold Rush-era flumes, sluice boxes, and mine shafts, as well as ties and trestles for the transcontinental railroad. That historic forest is mostly gone now, and a different forest has taken its place. Heavy early logging and successful fire suppression have transformed yesterday’s forest into a forest overgrown with smaller trees, shredded by bark beetles and ravaged by wildfires. But this new forest is at great risk, and that is the story of this book. Authors Carl E. Fiedler and Stephen F. Arno recount the history of humans among the ponderosa pines, the historical role of fire, how and why the forest has changed, and what people can do to restore the forest to its former glory. A richly illustrated guide at the back of the book features 64 ponderosa places scattered across the West, from dwarf pines growing in solid rock to towering trees in moist valleys.