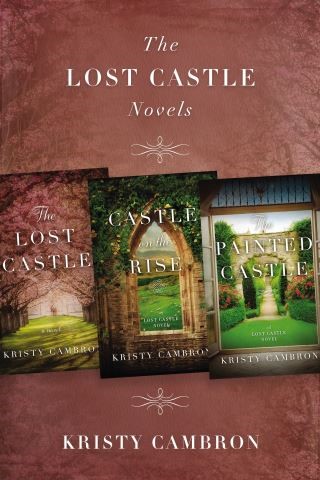 The Lost Castle, Castle on the Rise, The Painted Castle

Broken-down walls and crumbling stones seemed to possess a secret language all their own. What stories would they tell, if she finally listened?

Bridging the past to the present in three time periods—the French Revolution, World War II, and present day—The Lost Castle is a story of loves won and lost, of battles waged in the hearts of men, and of an enchanted castle that stood witness to it all, inspiring a legacy of faith through the generations.

Castle on the Rise

A storied castle. A band of rebels. A nation chasing a centuries-old dream of freedom. And three women who rise above it all . . .

From the storied streets of Dublin to the shores of the Emerald Isle, Castle on the Rise unites the legacy of three women who must risk mending the broken places within for life, love, and the belief that even through the depths of our pain, a masterpiece of a story can emerge.

A lost painting of Queen Victoria. A library bricked off from the world. And three women, separated by time, whose lives are irrevocably changed.

Set in three time periods—the rapid change of Victorian England, the peak of England’s home-front tensions at the end of WWII, and modern day—The Painted Castle unfolds a story of heartache and hope and unlocks secrets lost for generations just waiting to be found.

Praise for the Lost Castle series:

“Another page turner! Kristy Cambron will enthrall readers with this gripping tale of three uniquely troubled women from different centuries yet linked by secrets hidden behind the walls of an ancient English castle. Enjoy the ride as Cambron uses her trademark skill peeling away the mystery surrounding East Suffolk’s Parham Hill Estate and the answer to each woman’s heart—one tantalizing layer at a time. The Painted Castle is a story compelling, beautifully written, and sure to thrill a broad range of historical fiction fans!” —Kate Breslin, bestselling author of Far Side of the Sea

“Enchanting and mesmerizing! Castle on the Rise enters an alluring land and time with a tale to be treasured. Ireland comes to life with as much vivid light as the characters of this dual-timeline tale of redemption and love. For those of us who love Ireland and its misty shores, its myths, and its mysteries, Kristy Cambron brings it all to life. More than once I wished to walk through the pages of Castle on the Rise and join Cambron’s magnificent women on a quest for the truth, and for love.” —Patti Callahan, New York Times bestselling author of Becoming Mrs. Lewis

“As intricate as a French tapestry, as lush as the Loire Valley, and as rich as heroine Ellie’s favorite pain au chocolat, The Lost Castle satisfies on every level. The three timelines weave and build upon each other, as the three heroines navigate dangerous times and unravel ancient secrets. Kristy Cambron’s writing evokes each era in loving detail, and the romances are touching and poignant. C’est bon!” —Sarah Sundin, award-winning author of The Sea Before Us and the Waves of Freedom series

KRISTY CAMBRON is an award-winning author of historical fiction, including her bestselling debut The Butterfly and the Violin, and an author of Bible studies, including the Verse Mapping series. She’s a passionate storyteller who travels to speak at events across the country, encouraging women to experience a deeper life in the Word through verse mapping. Her work has been named to Publishers Weekly Religion & Spirituality TOP 10, Library Journal Reviews’ Best Books, RT Reviewers’ Choice Awards, and received 2015 & 2017 INSPY Award nominations. Kristy holds a degree in Art History/Research Writing and has 15 years of experience in education and leadership development for a Fortune-100 Corporation, working with such companies as the Disney Institute, IBM/Kenexa, and Gallup. She lives in Indiana with her husband and three sons, and can probably be bribed with a coconut mocha latte and a good read. Visit Kristy online at kristycambron.com; Instagram: kristycambron; Twitter: @KCambronAuthor; Facebook: @KCambronAuthor; and Pinterest: Kristy Cambron.