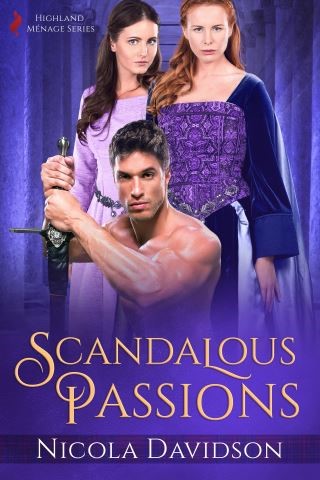 Lady Janet Fraser didn’t earn her reputation as Scotland’s most notorious sinner by following the rules. A former mistress of King James IV, she’s content to live her life from pleasure to pleasure. Even if those pleasures—and people—are forbidden.

People like Sir Lachlan Ross, given the moniker The Highland Beast, a man as intimidating in battle as he is in size. A beast she discovers secretly wishes to be tamed and submit to her dominance.

Or like her new ward, Lady Marjorie Hepburn, a convent-raised virgin with a desire to be taught all the sensual secrets of the marriage bed. Things that Janet is fully willing to teach her, again and again. There’s much for her to learn.

And forbidden pleasures like the three of them together in one bed.

But Lachlan and Marjorie both have ties to the king. As wicked lusts are indulged and affection unexpectedly grows into love, breaking the rules this time could mean all of their undoing…