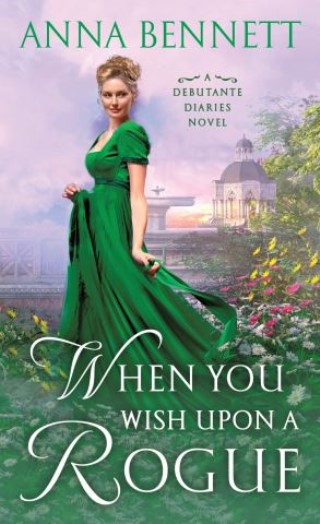 When You Wish Upon a Rogue

Once upon a time in Anna Bennett's When You Wish Upon a Rogue, three young ladies vowed to record their first London seasons and to fill in the gaps of their educations.

She knows what she wants.

Miss Sophie Kendall is happiest arranging the secret meetings of the Debutante Underground, a group of women who come together to discuss the weekly advice column The Debutante’s Revenge. What makes Sophie most unhappy is her impending march down the aisle to a man she does not love. But her family’s finances are in increasingly dire straits.

He makes an offer she can’t refuse.

Henry Reese, Earl of Warshire, hasn’t slept in weeks. Desperate to escape his manor house and its haunting memories, he heads for one of his abandoned London properties. There he meets a beautiful, intriguing woman—trespassing. Reese is far less interested in Sophie’s search for a secret meeting spot than he is in her surprising ability to soothe his demons. So he strikes a bargain with her: his shop in exchange for spending one night a week with him.

Is this love for real—or just a dream?

Sophie never expected this to happen. But she cannot deny the fire Reese sparks in her—and soon their shared desire burns bright. Sophie is irrevocably promised to another. But maybe these two ill-fated lovers can find a way to risk it all—all the way to happily ever after…

"Sparkling." - Publishers Weekly on When You Wish Upon a Rogue
“Fans of…Eloisa James, Tessa Dare, and Mary Jo Putney will go wild.”—Booklist

Anna Bennett started swiping romances from her mom’s bookshelf as a teenager and decided that books with balls, dukes, and gowns were the best. So, when she had the chance to spend a semester in London she packed her bags—and promptly fell in love with the city, its history, and its pubs. She dreamed of writing romance, but somehow ended up a software analyst instead.

Fortunately, a few years and a few careers later, Anna found her way back to writing the stories she loves and won the Romance Writers of America’s Golden Heart®. She lives in Maryland with her husband and three children, who try valiantly not to roll their eyes whenever she quotes Jane Austen.

Anna's books include the Wayward Wallflowers series and the Debutante Diaries series.