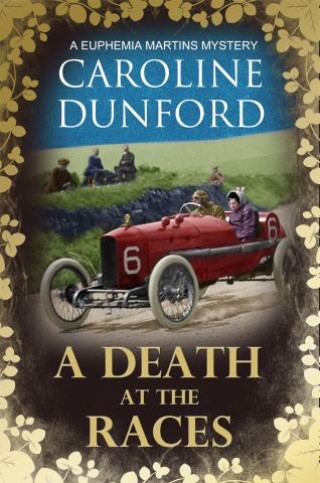 A Death at the Races

'A perilous predicament for the ever-resourceful Euphemia. Highly entertaining.' - Penny Kline, author of The Sister's Secret

'Euphemia is charming and witty and completely adorable. Loved it.' - Colette McCormick, author of Ribbons in Her Hair

It is early 1914, the world is on the brink of war and newly-weds Bertram and Euphemia Stapleford have just returned from their honeymoon. But Euphemia's duty lies with her King and country and she is ordered to accompany spymaster Fitzroy as his navigator in an unofficial car rally across Europe. Their task is to collect top-secret information at a dead drop en route from Hamburg to Monaco. Masquerading as Fitzroy's younger brother, Euphemia endures the most terrifying journey of her life. Before the race has even begun Fitzroy's life is put in danger and further violent attempts to sabotage their mission soon follow. When British double agent Otto begs them to help prevent the assassination of one of the Kaiser's relatives, they don't know who to trust. For it is impossible to tell who is actively hostile, as opposed to merely competitive, in a race in which so many lives are at stake...